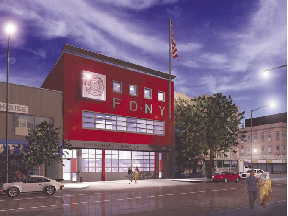 Construction has begun on a three-story firehouse for Engine Company 201 in Sunset Park, Brooklyn - one of the first to be built under the auspices of the Design Excellence Program of the New York City Department of Design and Construction (DDC), according to Carmi Bee, FAIA, president of RKT&B Architects, the project's architect.
The $6.8 million, 17,000 s/f firehouse is being built on the lot of a recently demolished two-story firehouse, located at 5113 Fourth Ave.
"The design challenge was to address the needs of three different entities: the FDNY, the DDC and the local community," said Bee. "The FDNY's priorities were operational efficiencies and decreased response time. The DDC sought a facility that would set the general design standards for all new firehouses. And the goal for the community was to create a civic building with a bold presence.
"Another objective was to demonstrate the important role that firehouses play in the communities they serve," said Bee. "To accomplish this, we incorporated symbolic elements in the design of the front faÃ§ade, including the use of glazed red brick and the incorporation of the Maltese Cross - a symbol of protection and a firefighter's badge of honor - in a suspended, illuminated glass lantern. In addition, we decided to make the front of the apparatus floor transparent to further the sense of connection to the community."
Liro Group is serving as the project's construction administrator. Robert Silman is the structural engineer and Reynaldo Prego is the mechanical, electricity and plumbing (MEP) engineer.
Tags:
Previous StoryNext Story
Print
PDF