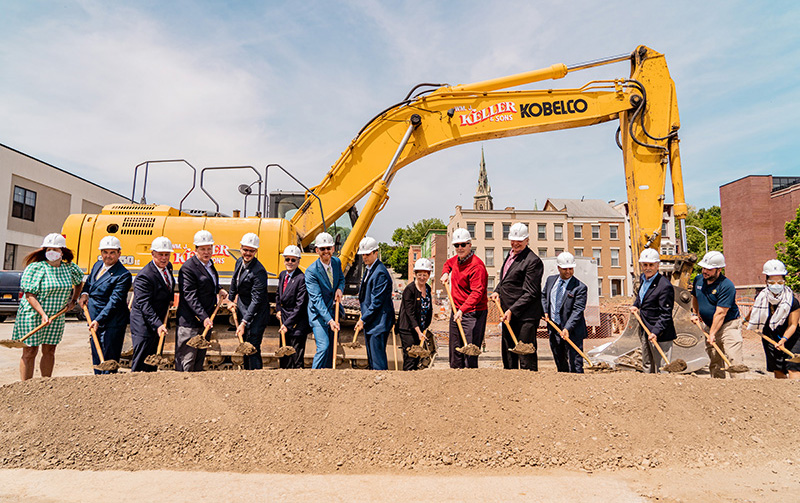 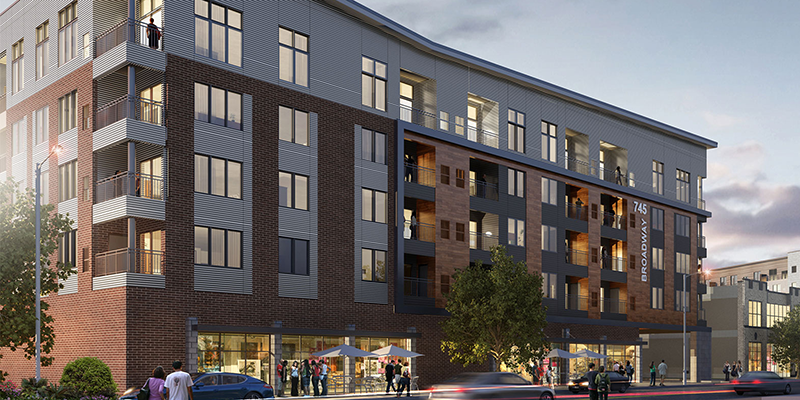 Aries Power, a local distributed generation development company is the solar PV project manager. With the addition of the solar system at 745 Broadway, Rosenblum has over 2 megawatts of rooftop solar production capacity installed or in development.

Rosenblum Development is the construction manager.

Apartments are scheduled to become available in phases beginning summer 2023.

Alex Kutikov of Redmark Realty is handling leasing of the commercial space.

“Industrie truly embodies our holistic ‘place, performance and practice’ approach to sustainable development and represents another watershed on our company’s path to net-zero carbon for all projects,” said Jeff Mirel, principal of Rosenblum Development. “By combining a highly efficient, emission-free building with environmentally friendly amenities in a transit-oriented, bikeable location, we will offer residents of Industrie a new standard for healthy, comfortable, lower carbon living.”

Industrie is Rosenblum’s second multifamily project in the city’s downtown. The first, 17 Chapel Boutique Condominiums, was recognized as one of “50 Projects That Are Reshaping Life and Business in the Capital Region” by the Albany Business Review and a catalyst for the City’s downtown multifamily housing renaissance. Industrie represents another first for the company – Rosenblum’s inaugral zero-emission apartment building.

The project is committed to achieve certification to the EPA’s Energy Star Multifamily New Construction program and EPA’s Indoor airPLUS program as well as NYSERDA’s Carbon Neutral-ready designation. Funding is being provided through the NYS Clean Heat Program sponsored by National Grid and the New Construction—Housing program administered by the New York State Energy Research and Development Authority (NYSERDA).

Doreen Harris, president and CEO of NYSERDA said, “NYSERDA is pleased to provide support for Rosenblum’s innovative zero-emission Industrie Apartments project, which will serve as a model for the future of new construction that showcases all electric systems, energy efficiency features, electric vehicle charging, and clean renewable energy from rooftop solar. Projects like this demonstrate that low carbon green buildings provide energy savings and health benefits for occupants along with the convenience of electric vehicle charging capabilities in support of governor Hochul’s commitment to achieve 2 million climate-friendly homes by 2030.”

Albany mayor Kathy Sheehan said, “Downtown Albany is experiencing a resurgence driven by community-focused business leaders like Rosenblum Development, new residents choosing to live in this neighborhood, and smart public investments like the Albany Skyway. Rosenblum’s zero-emission, mixed-use development will be at the center of it all, providing housing options that will help residents reduce their carbon footprint and strengthening the link between downtown and the Warehouse District. I cannot wait to see the Industrie Apartments open and welcoming new neighbors to downtown Albany.”

“With its emphasis on sustainability and its access to cultural attractions and transit options, this project will help Albany County attract new residents by providing inspiring living spaces that encourage connection and foster community,” said Albany County executive Daniel McCoy. “We’re excited Rosenblum Development is investing in this zero-emission multifamily building, especially with the surging momentum fueling our region’s offshore wind and renewable energy industries. It’s another important step forward as our community continues our collective work to address climate change, support our environment and grow our local economies.”

“I’m thrilled to celebrate the groundbreaking for this innovative project. As our climate crisis worsens, it is more important than ever to find ways to reduce emissions and promote sustainability as we invest in the development of our growing urban centers,” said congressman Paul Tonko. “With fully electrified systems, smart building controls, EV charging stations, and solar power arrays, the Industrie Apartments project is a perfect example of the kind of mixed-use, transit-oriented housing we need to move our Capital Region forward into a clean energy future. I am confident this project will make a significant, sustainable, and necessary contribution to the ongoing revitalization of downtown Albany.”

Assemblymember John McDonald III, RPh., said “Today’s groundbreaking for Rosenblum Development’s newest project in downtown Albany shows this company’s commitment to investing in transformative developments for our community. As a zero-emission development, the project also follows the steps New York is taking to protect our environment and support our climate. I am thrilled to see this continued investment in downtown Albany.”

“This investment complements a new wave of investment and revitalization coming to downtown Albany, the core of the Capital Region,” said assemblymember Patricia Fahy. “Not only will new residential and mixed-use development space encourage further growth in our communities, but it will drive increased connectivity between neighborhoods that contributes to a healthier, greener, and more inter-connected future.”

“Rosenblum Development’s Indusrie Apartments will strengthen downtown Albany, bolster the Broadway corridor that connects to the Warehouse District, and provide another spark to fuel the Capital Region’s push for sustainability and clean energy development,” said Capital Region Chamber of Commerce president and CEO Mark Eagan. “It’s an exciting moment for our region’s business community to celebrate Rosenblum’s investment and the start of construction for their zero-emission mixed-use development, driving ongoing economic development momentum in Albany.”

“Residential is on the rise in Downtown, and with the recently opened Albany Skyway, forthcoming Clinton Market Collective, and world-class public art, dining, and shopping within steps of your front door, it is no wonder people are excited to live here,” said Downtown Albany Business Improvement District executive director Georgette Steffens. “As the Capital City’s fastest growing neighborhood, we are grateful to Rosenblum Development for their investment that adds 80 apartments, providing our additional foot traffic as new residents enjoy Albany’s Central Social District.”

“Breaking ground on this project is another inspiring step forward for Clinton Square and strengthening neighborhood connectivity, while tripling revenue to local taxing jurisdictions anticipated without this investment,” said City of Albany IDA CEO and Capitalize Albany Corp. president Sarah Reginelli. “Congratulations to Rosenblum Cos. on this exciting eco-friendly endeavor and its first zero-emission apartment building. From the Skyway to theREP’s new home, plans are coming to fruition and more stunning new investment like this is progressing downtown’s revitalization.”

“Mixed-use development projects like this strengthen our cities and reinforce the need for sustainable and convenient public transportation options. Rosenblum Development creates communities with this in mind, and CDTA is proud to play a role in making these types of projects more feasible. We are always looking at new and innovative ways to meet the transportation needs of our region,” said Carm Basile, CEO of the Capital District Transportation Authority.

“The continued development of exciting new residential projects like Industrie in Downtown Albany is a testament to the ongoing demand for new, modern housing options in vibrant, walkable neighborhoods. This project would turn an underutilized lot into the latest redevelopment of the Broadway corridor expanding north from Clinton Ave. Along with the opening of the Skyway and the critical investments from the city’s successful DRI, downtown Albany continues to see a renaissance. The green features of this new apartment building are a first for the Downtown and something we hope to see more of in future developments, not just in downtown but throughout the city of Albany,” said Matthew Peter, executive director of the Albany Parking Authority.