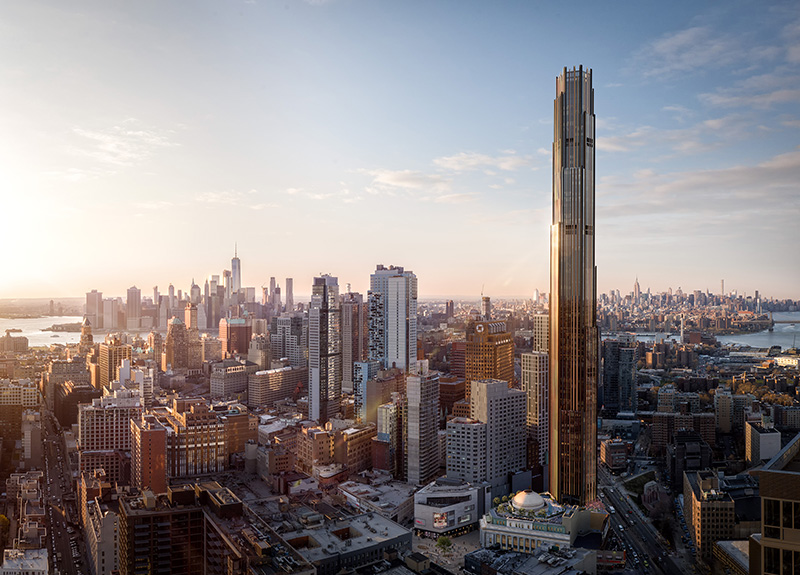 Brooklyn, NY JDS Development Group and SHoP Architects celebrated the topping out of The Brooklyn Tower at 9 DeKalb Ave.—the borough’s first supertall skyscraper—at 1,066 feet. Here heritage and modernity meet: The landmarked Dime Savings Bank of Brooklyn has been incorporated into an imaginative new building that rises to 93 stories and sets a new standard for the borough. Formed by interlocking hexagons and cascading setbacks in a façade of bronzes and deep blacks, The Brooklyn Tower is a monumental new residential building with views over city, river, and harbor. The project will house residences for sale and lease, with retail at its base.

Rising from the native geometries of the neighborhood streets, the Tower’s form draws inspiration from the hexagonal composition and patterning of the historic Dime Savings Bank of Brooklyn and its landmarked interior, where locals could once open a savings account for as little as a dime. Designed by esteemed architects Halsey, McCormack & Helmer (1931-1932), an expansion of Mowbray & Uffinger’s building (1906-1908) on the same site, the historic structure has been celebrated by critics for its civic-minded urban design and was designated a NYC landmark in 1994. As one of the largest savings banks constructed in the country, the institution played a role in the development and growth of the borough, and serves as a gateway to the Fulton Street Mall shopping district. 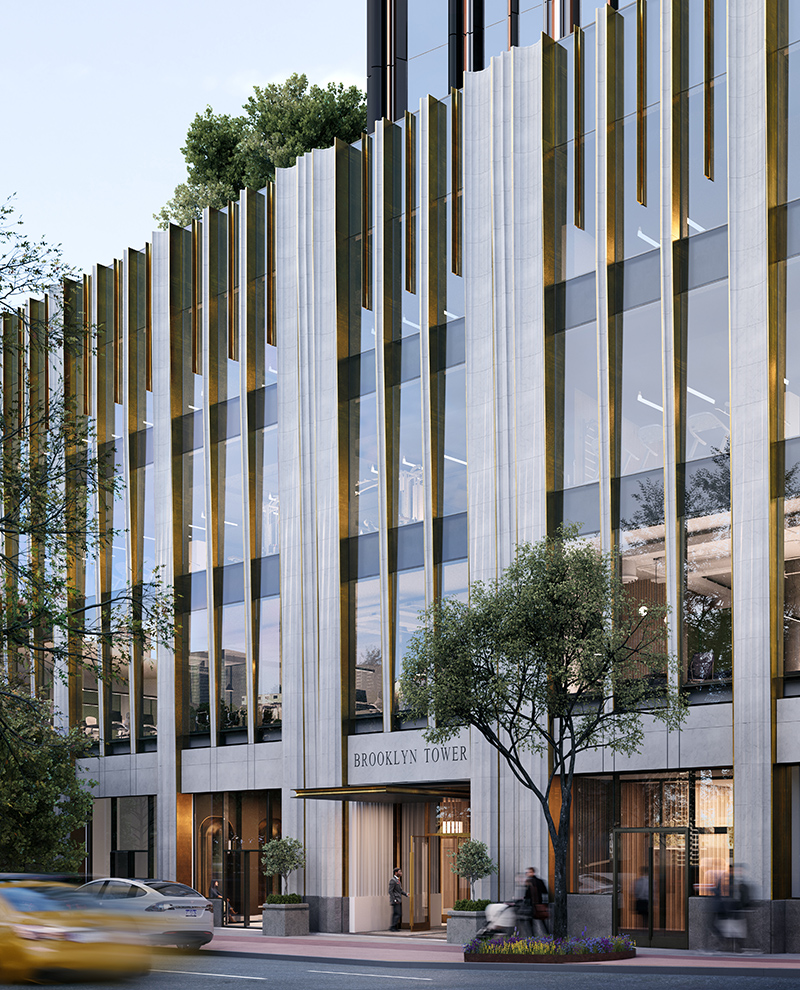 Decommissioned as a working bank, the space will become publicly accessible once again as a new retail flagship. The 115-year-old structure is being restored and integrated with the new tower through the introduction of a retail entry at Flatbush Ave. Extension and at Fleet St. (one of the tower’s two entrances), where residents will enter the tower’s main lobby through the Ionic colonnade. On the roof deck, residents will be able to swim, lounge, and barbeque around the historic dome.

The materiality of The Brooklyn Tower incorporates white marble at its base, and evolves to blackened stainless steel and shades of bronze and copper as the tower ascends. The facade holds its shape, texture, and materiality at every angle, deploying a wide variety of fluted, cylindrical, and triangular shapes arranged in a vertical composition between oversize glass panes. This combination of effects gives The Brooklyn Tower an expression that is at once welcoming, dramatic and playful.

This is of the most connected neighborhoods in New York City, with unrivaled transportation access to 13 subway lines, 11 commuter trains via the LIRR at Atlantic Center, and 22 Citibike stations. Downtown Brooklyn lives at the intersection of three of Brooklyn’s most beloved Brownstone neighborhoods (Cobble Hill, Boerum Hill, and Fort Greene), with proximity to DUMBO and Brooklyn Heights. Downtown Brooklyn is the third-largest central business district in New York City and home to a robust technology and innovation sector, shopping along Fulton St. and nearby Atlantic Ave., and more than 100 arts and cultural institutions, including centers for the neighborhood and the city the Brooklyn Art Museum, BRIC, Brooklyn Academy of Music, and the Barclays Center. Brooklyn is a major culinary destination, with nearby DeKalb Market Hall, Grand Army, Gage & Tollner, Roman’s by Andrew Tarlow, and the famed Junior’s Cheesecake. Residents will also be in proximity to some of the city’s finest public parks and greenspaces, including beloved Fort Greene Park just five blocks away, the recently revitalized Brooklyn Bridge Park, and the borough’s flagship Prospect Park. Significant new growth in the residential and hospitality sectors has ushered in a new era of 24/7 living in the neighborhood, while other streetscape transformations are underway.

“Today marks a significant milestone for Brooklyn and New York City as The Brooklyn Tower reaches its peak, continuing Brooklyn’s long history of design innovation and bold thinking,” said Michael Stern, founder and CEO of JDS Development, the developer and builder of the project. “We take great pride in the thoughtful work that SHoP and our JDS Construction team have done to create this unprecedented new tower, while carefully preserving the historic Brooklyn landmark.”

The Brooklyn Tower represents yet another large-scale adaptive reuse project in New York City by JDS Development Group. The firm is known for complex assemblages, self-performing construction in New York City projects, and moving markets through transformative, design-forward projects that have raised the bar for new development real estate and challenged the status quo.

The Brooklyn Tower is the third large-scale, mixed-use project by JDS and SHoP in the city.

“The SHoP team is thrilled to be a part of a project that is so impactful to one of the world’s most acclaimed skylines,” said Gregg Pasquarelli, Founding Principal of SHoP Architects. “As more people look to move to Lower Manhattan and Brooklyn, the detail that went into the texture and shape of the structure was critical. We wanted it to remain authentic, with that baroque, Brooklyn charm, but also look crisp and modern to capture the borough’s constant state of growth and influence.”

The Brooklyn Tower features 550 residences—150 residences for purchase and 400 residences for lease—with 100,000 s/f of retail at its base. The project also includes over 100,000 s/f of amenities, including health and fitness spaces offering diverse programming, and elevated outdoor loggias for skyline lounging and recreation. 30% of the rentals are designated as affordable housing. Residences for purchase start at an elevation over 500 feet, where most penthouses cap nearby new development projects, and offer sweeping views through floor-to-ceiling windows of the Manhattan skyline, the East River, the Statue of Liberty and New York Harbor, Prospect Park, and all of Brooklyn. Residence interiors were designed by AD100 design firm Gachot Studios, with amenity interior design lead by Krista Ninivaggi of Woods Bagot, and landscape