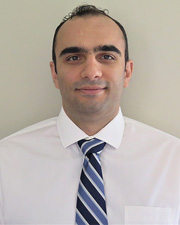 New York, NY Abdolreza Jafari, laboratory director, has guided Alan Margolin & Associates (AMAA) to be a leading provider of material testing services in the New York City and Tri-State areas. He began at the firm as a special inspector and later emerged as an executive figure in material testing solutions. In collaboration with AMAA’s managing partner, Andrew Borek, AIA; Jafari built the firm’s very first material testing division. With an emphasis on practicality, he proposed a new procedure manual and hand-selected a licensed staff to work with him at a new facility in the Bronx. Over the last several years, Jafari took measures to ensure the facility earned accreditation for concrete and aggregate work, then soils and asphalt, and finally masonry. His participation in many audits and proficiency programs led to recognized affiliation with leading industry establishments, including AASHTO, CCRL, DOB, and DDC.

Jafari was born and raised in Thran, Iran. In 2002, he immigrated alone to New York City at the age of 17. As the first person in his family to immigrate and reside in the United States permanently, he worked tirelessly to set the groundwork for his parents and siblings to join him in obtaining residency as well. Despite the challenges faced around cultural and language barriers, Jafari enrolled in the New York City Department of Education system to finish high school. He was then accepted to the City College of New York’s Civil Engineering program, where he received his bachelor’s degree with a structural focus. Jafari worked 16-hour shifts every Saturday and Sunday throughout his academic studies at the university. This guaranteed he would pave a life for himself in America debt-free upon graduating.

Prior to AMAA, Jafari joined an expediting firm established by fellow CCNY graduates. It was at the firm that he first gained exposure to DOB forms and filing processes for government agencies such as the DDC, SCA, and NYCHA. He then moved to Tectonic Engineering & Surveying to perform special inspection and material testing work. In 2014, he pursued alternative opportunities as a project manager for HAKS Engineers, Architects and Land Surveyor; he directed special inspections and material testing for privately and publicly funded projects at a larger scale.

Jafari applies his expertise in the industry to form the bridge between contractors and designers. He manages AMAA’s material testing laboratory exclusively by the standards and specifications of the New York City Building Code. His understanding of environmental complexities prioritizes efficiency in the laboratory’s turnaround time and clear communication across team members. Jafari’s personal accreditations include but are not limited to: Professional Engineering in New York and Connecticut, ACI, ICC, and NICET.

With a deep knowledge of material and structural integrity, Jafari has assembled both a facility and team committed to the world built around us. Under his direct leadership, AMAA’s material testing laboratory has obtained many certifications, with opportunities to receive additional licensing each year. The laboratory is well equipped for any size project that requires mega pour inspections, high-strength sample testing, destructive and non-destructive testing. Commonly seen through building construction, infrastructure, and road work; the environment requires strict levels of oversight to maintain the safety of inhabited structures. Since its establishment, Jafari has successfully transformed the laboratory into a one stop shop for both small and large project capabilities. Due to his attributions, the firm provides material testing services for billions of dollars in construction and structural engineering projects, both private and public, in and around the New York Metropolitan area. Through Jafari’s efforts and with the help of the AMAA team, the firm has provided, and is currently providing, services to buildings enhancing New York City’s skyline today. These projects include 40 Tenth Ave.’s Solar Carve Tower and 200 Montague St., both owned by Aurora Capital Partners.