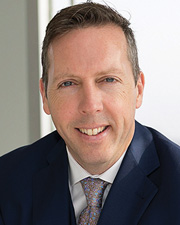 New York, NY Niall Murray, this month’s executive of the month, is managing principal of Rockabill.

Murray came to New York City with a green card and a dream—and that was it. The year was 1994 and Murray was working as a certified accountant in his native Dublin when he won permanent residency through a lottery. “I didn’t know anyone or anything, but figured why not go to the most competitive city in the world and see if I have the chops to make it,” he recalled.

Upon arriving stateside, Murray found work in the cleaning division at Rockefeller Center. Under the watchful eye of his supervisor, he was initiated into life in the Big Apple, “I was handed a razor blade and told to scrape the hardened gum off the pavement along Fifth Ave.,” he chuckles. Today, Murray can look back on his unglamorous start in New York City and laugh, but it was an experience that stayed with him.

Fast forward nearly 30 years, and Murray is “the Irish guy in New York who everyone knows,” quipped a colleague. Over the past 14 years, Murray’s firm has consulted or partnered on the development and financing of over 12,000 affordable housing units throughout New York City and State and has over 5,000 units in the pre-development stage. His latest venture—ConRock Construction, a general contracting firm specializing in tenant-in-place rehabs—has over $100 million in projects in the pipeline.

Murray found his way into the affordable housing world while at Allied Irish Banks (AIB) which had a history of lending to not-for-profits in a variety of industries, including community development. Those relationships led to the idea of founding a division where Murray was tasked with figuring out the complexities of deal structures using the Low-Income Housing Tax Credit (LIHTC) program. Several years later, he left AIB to form his own boutique firm, Rockabill.

Rockabill carved a niche for itself by providing expertise to nonprofit and religious organizations in the affordable housing space, and quickly expanded beyond ground-up construction to the preservation and renovation of existing buildings. “Time after time, we were seeing portfolios in dire need of restructuring, buildings that haven’t been touched in 40 years or owners who are reluctant to enter into regulatory agreements,” explained Murray. “Everyone’s heart was in the right place, but the finance and the renovation work wasn’t getting done.”

Over the past decade, Rockabill’s services have evolved organically in line with Murray’s desire to build a diverse business model and an array of offerings for his clients. Through its consulting platform, Rockabill is engaged in all aspects of a project, from examining its financial feasibility through transitioning from the construction to a permanent loan.

“It’s incredibly gratifying when a client’s perspective begins to shift and they realize they can further their mission by capitalizing on the value of their assets,” said Katie Devine, one of the firm’s principals. “Helping those who serve the most vulnerable build capacity and confidence when it comes to utilizing and managing their real estate is an important part of the work we do.”

Following in the tradition of the lighthouse off the Irish coast from which it draws its name, Rockabill takes pride in guiding a project safely to harbor. The firm’s client roster is a veritable ‘who’s who’ of the city’s top not-for-profits and proof that Rockabill has solidified itself as a trusted advisor and partner to the affordable, supportive and shelter housing community.

“The Rockabill experience provides certainty to our investor base that the project will close within the projected time frame, the due diligence process will be more manageable, any unforeseen problems will be addressed efficiently and the investment long term will be stronger,” explained Neala Martin, senior vice president for Acquisitions at CREA.

Most recently, Rockabill arranged $18.2 million in financing for West Harlem Group Assistance (WHGA) in partnership with Merchants Capital. The funding will go toward making extensive capital improvements at Mannie Wilson Towers, an apartment complex in the heart of Harlem that provides 102 affordable homes for low-income seniors. It is a project that is close to the Rockabill team’s heart, and one that will greatly improve residents’ quality of life.

With Murray at the helm, Rockabill has begun actively acquiring existing affordable and workforce housing properties. The firm now acts as a direct owner or joint venture partners with both for-profit and nonprofit organizations—and business is booming.

In Utica, the firm is embarking on its first-ever Passive House certified development with co-owners Johnson Park Center (JPC). As Richard Brown, another of the firm’s principals, explains, “We want to prove that it’s possible to build supportive housing to the ultra-low energy standards and inspire others to include resiliency infrastructure in affordable and supportive housing developments.” The project has been met with fanfare and received $1 million in the latest round of NYSERDA’s Buildings of Excellence Competition.

Earlier this year, Rockabill’s development arm celebrated the successful preservation and rehabilitation of three apartment buildings in the Glendale section of Queens. To ward off the sale and conversion of the properties to market-rate, Rockabill and Selfhelp Community Services acquired the buildings, entered into a regulatory agreement and provided all residents with rent-stabilized leases. The preservation transaction generated more than $5 million, which was used to complete extensive capital repairs and improve residents’ quality of life.

Over the course of the COVID-19 pandemic, Murray and his team went a step further by making vacant units in the buildings available to serve formerly homeless individuals and families. “We are so proud of Rockabill, ConRock and Selfhelp for seeing this project through despite very challenging conditions,” remarked HPD commissioner Louise Carroll at the time.

The Glendale Neighborhood Pillars project was also the maiden voyage for Murray’s general contracting firm, ConRock, of which he serves as co-president along with Bill O’Connor of Parish Property Management. Inspired by the scarcity of tenant-in-place construction expertise in the marketplace, Murray and O’Connor set out to build a company with the soft skills necessary to execute delicate rehab-related tasks, such as managing communication to tenants around relocation.

“Contractors tend to shy away from preservation rehab work because of its high-touch and can be a labor of love,” said Murray. “Our goal is to bring understanding and sensitivity to a segment of the industry that lacks depth in that area.” It’s a bet that is already paying off, and has brought Rockabill closer to achieving Murray’s vision of a fully-integrated real estate platform.

Whether donning his development, consultant or contractor hat, Murray is consistent in both his recognition and appreciation of his employees. After reading a report about the lack of ownership opportunities at development firms—particularly for women—Murray committed to building a different kind of business. Beyond promotions, he provides employees the opportunity to grow into an ownership stake at the firm, which now has three additional principals: Tim Collins, Richard Brown, and the latest inductee, Katie Devine.

“I know what it’s like to develop your own business, to grow professionally and to participate in the success of that business,” explained Murray. “The goal is to extend an opportunity to our employees to develop their own clients and lines of business under the Rockabill umbrella, and ownership is a core component of that strategy.”