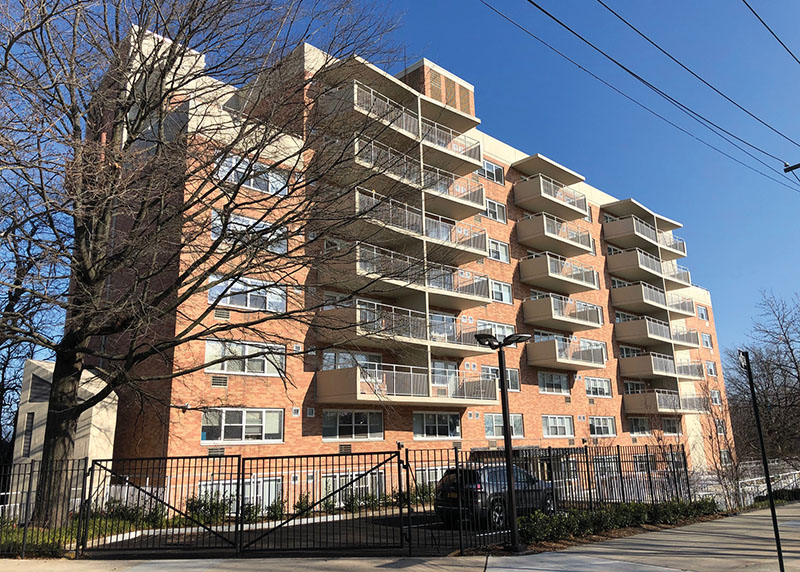 Located at 3077 Cross Bronx Expressway in the Throggs Neck neighborhood, Fort Schuyler House was built in 1973 under the New York State Mitchell Lama Program to offer safe, secure, independent living opportunities for seniors ages 62 and over. The eight-story building is comprised of 118 studio units, 20 one-bedroom units, and one superintendent’s unit.

The financing of the project included a combination of tax-exempt bonds and Low Income Housing Tax Credits. During construction, short-term and long-term bonds in a total amount of approximately $24.3 million funded the project’s rehabilitation. Rental assistance was obtained for existing residents through Tenant Protection Vouchers converted to Project Based Vouchers. Bond proceeds were utilized to fund development costs and make the project eligible for Low Income Housing Tax Credits.

The complex’s newly renovated units include the conversion of antiquated kitchenettes to fully functioning kitchens. All apartments also received new flooring; new electrical risers and CB panels; new emergency pull cords; and energy-saving appliances, radiator control valves, bath and kitchen fixtures, and LED lighting throughout. All tenants were able to remain living in their homes during renovations to minimize disturbance to residents.

Fort Schuyler House, Inc. continues to serve the local Bronx community as the managing member and general partner of the property.

“As New York’s senior population continues to grow, projects like Fort Schuyler that preserve affordability and improve housing quality are critical in allowing residents to safely age in the place they call home,” said Michael Rooney, Sr., principal of MDG. “We are proud to be able to transform apartments while residents continue living in their homes, a crucial benefit for seniors who may have more difficulty traveling and being temporarily displaced. Thank you to our partners for their dedication and collaboration on this multi-faceted project.”

“The apartment and building renovations were done professionally and of the highest quality. I am very satisfied with the work done and feel fortunate to rent an apartment in this beautiful building,” said Fort Schuyler House resident, LG.

“I am very pleased to be able to express the gratitude of Fort Schuyler House to MDG for the absolutely wonderful job they did bringing new life and beauty to a 45-year-old residential building for seniors who can live independently,” said deacon John Murphy, executive director of Fort Schuyler. “I see in the renovations and care provided by MDG a welcome sensitivity and witness to the original vision of Reverend Weaving, Fort Schuyler’s founder, to provide low-income seniors with a beautiful, comfortable, and safe home.”

“It has been our pleasure working with the Board of Directors of Fort Schuyler and our partners at MDG to complete this much needed project,” said Tim Henzy, principal and owner of Smith & Henzy. “We extend our gratitude to our development partners including NYSHCR, Nixon Peabody, and Newman Design Group for their tireless efforts and creativity that made this project possible.”

“Close collaboration between our thoughtful partners and our deep understanding of affordable housing management and compliance with various funding sources allowed for a seamless redevelopment of Fort Schuyler House,” Michael Rooney Jr., principal of Concord Management of New York.  “We are excited to bring this project and its residents into the future with continued affordability and renovated homes.”