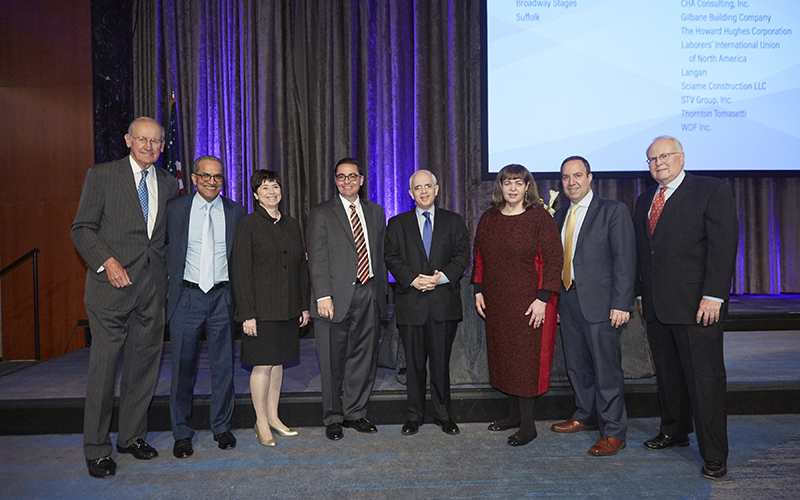 Building Congress president and CEO Carlo Scissura opened the program by noting that the organization and luncheon are unique in that they bring together such a broad range of industry professionals, including “the leaders of New York City’s design, construction and real estate community, representing architects, engineers, universities, hospitals, public authorities, and leaders of government.”

In her remarks, lieutenant governor Hochul cited the recent construction of the new Kosciuszko Bridge as being emblematic of a strong and growing New York City.  She praised Governor Andrew Cuomo’s infrastructure agenda, saying, “You actually have a Governor who is so bold and so audacious that he will take on projects, like the Tappan Zee Bridge, that people talked about literally for decades.” She also noted the governor’s redevelopment plans for Penn Station and LaGuardia and JFK Airports and praised the role of the building industry for its expertise and ingenuity in completing these projects.

Comptroller Stringer said that New York City has exceeded expectations since the Great Recession, exhibiting robust job growth, increased home ownership, and record investment in affordable housing.  However, he explained that it is essential that everyone work together to ensure economic growth and prosperity is spread across the five boroughs, said, “When economic opportunity reaches all parts of our city, we all do well.”

Rudin Management Company vice chairman and CEO William Rudin and vice chairman and president Eric Rudin presented the 2017 Jack and Lewis Rudin Award for Service to New York City to deputy mayor Shorris. William Rudin noted that the Building Congress was very special to his father, Lewis, and his uncle, Jack, a long-time vice chairman who passed away last year.  “Uncle Jack was devoted to making our city a better place and that spirit is something that our honoree first deputy mayor Tony Shorris has exemplified over the years.”

First deputy mayor Shorris began his acceptance by quoting Henry Wadsworth Longfellow, “Ah, to build, to build! That is the noblest art of all the arts,” and recognizing the Building Congress for its longstanding role in the industry.  “For almost a century, this organization has brought together builders who practice that art.”  First Deputy Mayor Shorris went on to speak about Jack and Lewis Rudin’s professional and personal legacies, calling them not only “great builders of buildings, but great builders of bridges between people.”

Izzo was joined by Scissura to present the 96th Anniversary Leadership Award to Mr. Ahmad.  Citing his accomplishments at HAKS, Izzo praised Ahmad for building his firm to become one of the nation’s fastest growing consulting engineering firms and noted his active role in the Building Congress. “Anyone who knows him can attest that Husam is an asset to the industry and the Building Congress.”

In his acceptance, Ahmad talked about the various roles he has held, including positions on the Boards of both the Building Congress and Building Foundation.  He expressed the importance and uniqueness of the organization, explaining, “It puts all of us - designers, contractors, labor leaders, builders, suppliers, agencies - together on one platform to think wisely and do the best projects we can with collaboration.”  In closing, he credited the HAKS leadership team for the firm’s impressive growth to 700 employees today.

New York Building Congress president emeritus Richard Anderson joined Larsen in presenting the 96th Anniversary Leadership Award to Lerner. Anderson described Lerner’s start in the industry, her professional accomplishments, and her leadership position in the American Institute of Architects New York Chapter.  “Her dedication and commitment to the city is what has made a difference not only for the AIA, but for all of us at the Building Congress and throughout the industry.”

In accepting the award, Lerner discussed her career and the pride she takes in her work.  She explained the importance of design on all scales - from the subway system, to the streetscape, to the skyline - because it affects all citizens of New York.  She noted that tackling the toughest urban problems requires the collaborative efforts of the entire industry, as well as government and other private sector businesses.  “It will get done by the efforts of those in this room, working together as New Yorkers.”

Scissura told the attendees, “I learned something in my first few months with the organization – everything we do really is a reflection of the industry and that’s because of all of you.  We thank you for making this one of our most successful luncheons ever. ”